Surprises happen when you least expect.  I am lucky to have a great group of volunteers for the Plover Patrol.  One of them is Molly.  She is my church pew mate. 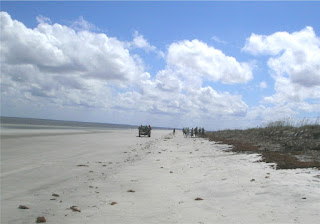 When she heard about this project of mine, she just jumped right into the task.                                            Well, Molly had a youth group coming to the Golden Isles to work in the area.  She needed one more project.  She thought of me.  So on June the 21, eleven young people from Durayton Ave. Presbyterian Church, Ferndale, Michigan were on the south end of Jekyll to help Ben Carswell, Jekyll Island Authority's Director of Conservation.  There is a cross over to the beach called the Glory Boardwalk.  This boardwalk has been undermine by the rough surf in the last couple of storms.  Now, there is debris all over the south end.  These young people and there advisers were there to help.
It was a perfect day to be on the beach.  The group broke into smaller groups and went right to work. 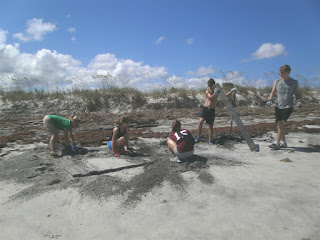 Here is one group uncovering part of the board walk partly buried in sand.  Last Monday, it had been floating.  Four day later on Thursday, it had to be dug up. 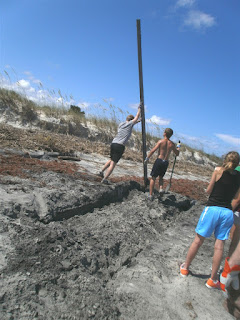 Right down to the last board. 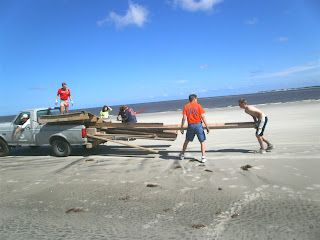 This group was working on just one part of the boardwalk.  There was lots more debris.
Here they are filling up the truck. 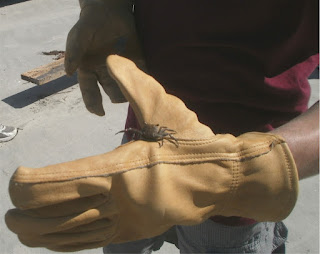 While they were working, they learned a little about the beach.  Here is a wharf crab that they found.    One young man told me he enjoyed being outdoors and would love to be a Beach Ranger on Jekyll. 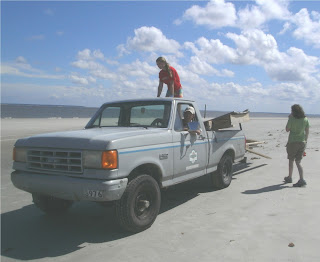 You never know, do you?  The Plover Patrol helps the plovers and other shorebirds but it is helping Jekyll in small ways.
Thanks Ben for pulling it all together.
Posted by Lydia at 7:03 PM No comments: 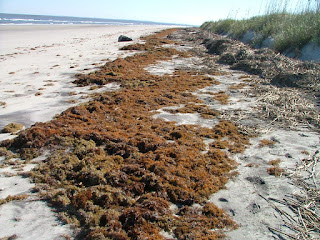 This is one of those sea weeds that is really wonderful....quite cool.  When out on the ocean, it is a safe world for all kinds of creature, like baby sea turtles.  It has Wilson's Storm-petrels dancing over it looking for tiny crabs that live in it.  Wilson's Storm-petrel are sometime called sea swallows for their swallow-like silhouettes. 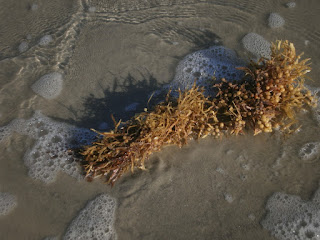 Here some sargassum grass is rolling in the surf at the south end of Jekyll.  Don't you like its golden color?  It has little bladders so it can float of the surface of the ocean. 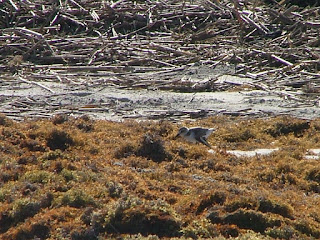 It is piling up right in front of the huge wrack line.  It appears the oldest Wilson's Plover chick has fledged and is now flying.   The second oldest Wilson's Plover chick still has the drooping wing.  Still it is running around and  gleaning insects in the middle of Sargassum grass.  Time will tell if this bird ever flies.  On the good news front,  we now have 4 new chicks on the southwest side of Jekyll.  Yea!
Posted by Lydia at 6:57 PM No comments:

Putting up the fence one more time helps. 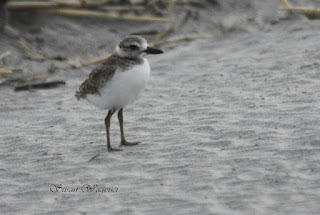 Here is the oldest Wilson's Plover chick.  This bird is flying now! The Second Wilson's Plover chick is close but we are wondering if this birds will fly.  However this little guy has surprised us before. 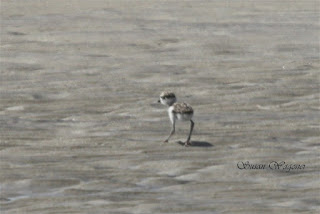 Sue Wagoner took all these pictures.  She surprised me by showing this picture.  It is the third chick on Jekyll! 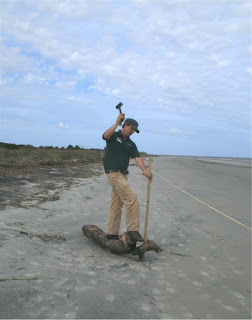 It took some work. Just last Friday, June 8, we had to put stakes back up. Here is Ben Carswell, Jekyll Island Authority's Director of Conservation hammering in one of those stakes.  It is a hard job but it is worth it. 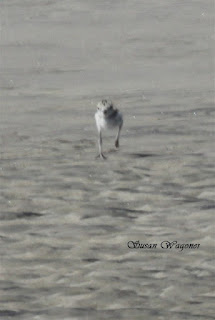 See!   The smallest chick is so cute.   It ran right by Sue.  Thanks Sue for these pictures.

The Wilson's Plover chicks grow up

I am just like a proud parent. Want to see the Wilson’s Plover chicks? They are growing up. Now I didn't take these photo. The credit goes to Melanie Kist. 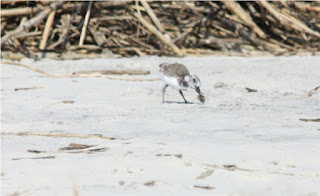 Melanie went on several of my Rambles at the end of May. She has a very good eye for photography. And she shares the photos. Here are a series of the younger Wilson’s Plover chick. 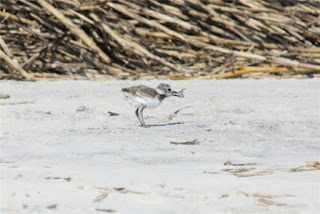 Here is Dad grabbing his own dinner 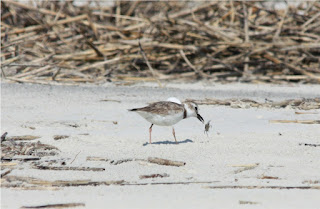 These are tough little birds and a joy to watch.


This little bird started out with a bad leg but that healed.
See this little one just eats one wharf crab after another. As you can see nothing hold the little guy back.
﻿﻿ 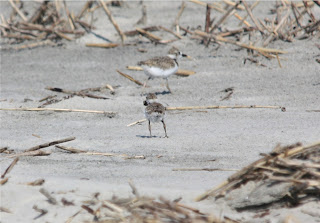 You can see why I call this chick little. Here it is with the older sibling.
Posted by Lydia at 6:57 PM No comments:

June 1, 2012 Tropical storm Beryl dumped much needed rain on us last weekend.  It also kicked up the surf.  So what happen to the fencing that defined the plover nesting area?  On May 31, I was out with Sue Waggoner and her friends and sure enough the fence was down.  But we did see the two Wilson’s Plover chicks.  They are doing finely. Plus Sue told me, they saw a young Wilson’s Plover chick.  That makes three chicks that are vital.  It is so hard for these beach nesting birds to survive.  Let’s keep our fingers crossed.


I email Ben Carswell about the fence.  We met and assess the damage. Ben had a meeting so I started to work.  It was a busy morning of pulling the stakes out of sand and putting them back up.  A whole section of the fencing was down due to boards from a boardwalk had been washed up and through and around the fence.  What a mess. See. 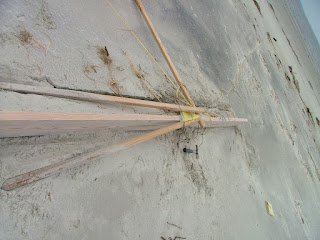 That took a lot of work untangling that mess, 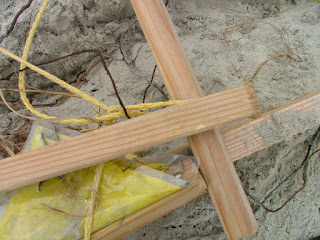 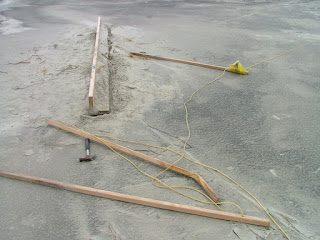 While I worked, I was entertained by the birds.  A Marbled Godwit was feeding nearby.  He was being dogged by a Willet.  Two Gull-billed Terns flew by.  They have such a buoyant way of flying.  Five Red Knots flew in for a few minutes but didn’t stay long enough to look for bands. 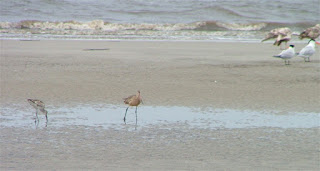 At the end, the fence was up.  Ben came out after lunch and pounded the stakes deeper into the sand.  He adjusted the rope so the fence is back up.  I went out in the afternoon and was rewarded.  The new Wilson’s Plover chick was running around.  The fence is working!!!!!