I work at the Jekyll Island Guest Information Center.  It has a great lunch room.  It is up the Wildlife Viewing Tower right next to the Center.  On Tuesday June the 18, I walk out to the tower.  Looking out, I was surprised to see my lunch companions were all gathered together....9 White Pelicans.  I was thrilled to spend my lunch with them. 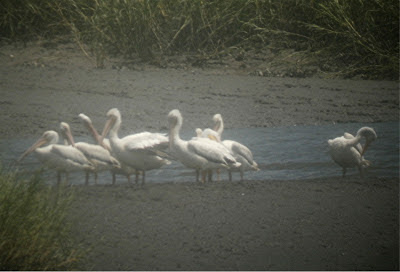 On May the 11th I joined a group from Atlanta Audubon to go out into the mouth of the Altamaha River.  It was a great day of exploring this naturally rich area.  Shorebirds were feasting on horseshoe crab eggs and surf clams. Here is a mixed group Semipalmated Sandpipers, Sanderlings, Dunlins and Short-billed Dowitchers 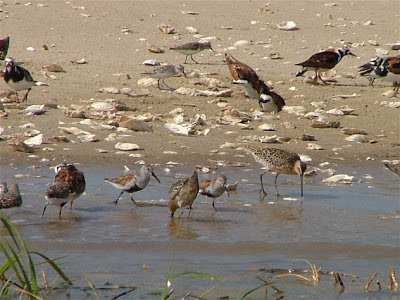 Moving on to the north end of Little St. Simons Island, we encountered Dunlins, Dowitchers, Ruddy Turnstones and a Red Knot. 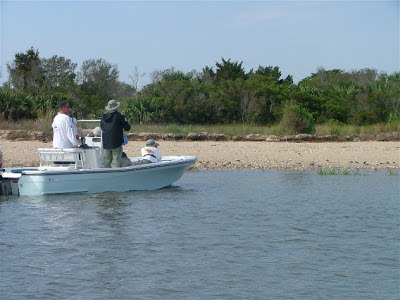 Here is part of the group enjoying the shorebirds. 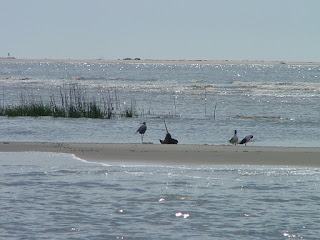 The tide was high so we were able to explore more the area up close. 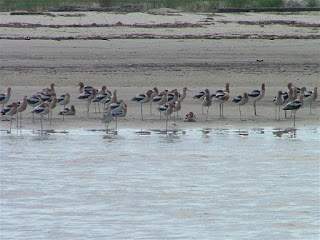 For me, the find of the day were 50+ American Avocet in breeding plumage.  Wow! 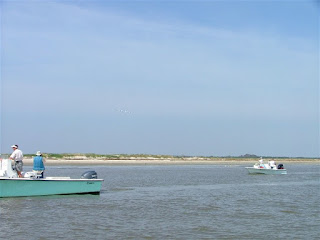 It is always fair weather when good folks get together.  Go explore!
Posted by Lydia at 9:15 AM No comments: 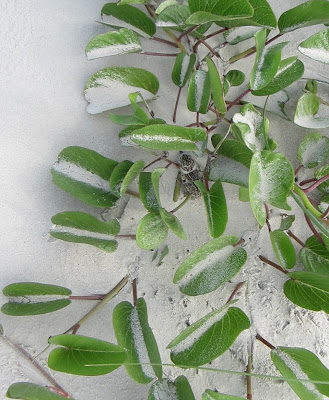 No wonder we can't find them on the beach. 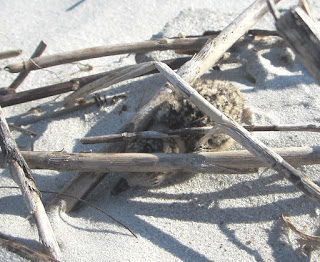 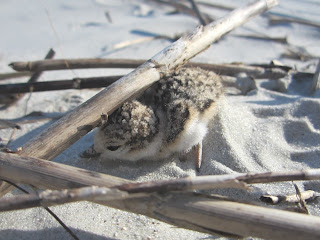 Please be careful where you step.  Keep up the good work Lauren.  All photos are by Lauren Deaner.

I am a little late but I am catching up
Just a word about where we went birding,  We stay for the most part in Glynn county and added McIntosh County in the afternoon.  We had a great time.  We saw a lot of birds.  It is always fair weather when good fellows get together. 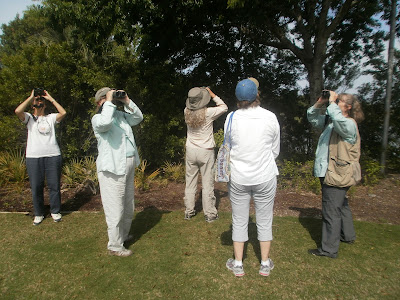 Here is the report:
The Babe-breasted Warblers
(left to rigght, Becky Valentine, Lynda Wiggins, Cheryl Kanes, Nita Wynn  and Lydia Thompson,)
enjoyed a fine day of birding, April 28, in Glynn County  and Altamaha waterfowl Management Area Mc Intosh County for the 2013 All Women's Birding Bust.
We began the day at 6 AM with the chorus of Carolina Wren, Northern Cardinal, Blue Jay, Northern Mockingbird and, in the distance, a Great Horned Owl calling. Next we found a local pond where a Wood Duck floated serenely along the edge. On our way to a marshy area where the tide had pushed up a Seaside Sparrow we found a couple of American Robins. By then the sun had completely risen and we still had over 125 more birds to find before we ended our day. We birded marshes, ponds, swamps, pine forests, woodlands and beaches as the warm, rainless day unfolded. We birded some new locations and some tried and true. We had some unusual sightings: Our lone Little Blue Heron was perched on a snag in the middle of a scrub field. 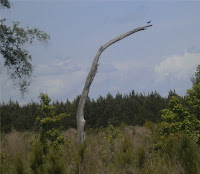 We spotted a Common Nighthawk in the middle of the day routed and chased by a couple of Red-winged Blackbirds. Found two lingering Lesser Scaup, a single Black Scoter and a Chipping Sparrow. Black-bellied Whistling Ducks were sitting on their nest boxes at Altamaha WMA. Usually uncommon Loggerhead Shrikes were popping up everywhere. We had some notable misses: Gray Kingbird, Swallow-tailed Kite, Waterthrushes, several species of expected Warblers, Mallard.
On our big day everyone had a job: Cheryl was our driver, Lydia was our navigator, Lynda verified questionable bird calls and songs, Nita and Becky kept track of our sightings via checklist and Birdlog. We ate well (sandwiches, fruit, cheese, gourmet trail mix), arrived everywhere safely and never got a ticket! Along the way we were (jokingly?) suspected of being part of a movie production crew filming in the area and the owner of the restaurant we schlepped into for dinner at 8:30 PM told us he remembered us from last year.  So we had fun and laughs too. After dinner we still had a few hours so we tried for the Eastern Screech Owl and Chuck-will's-widow but we were unsuccessful. So we ended the day with 135 species of which three were unshared. Look below for the list. 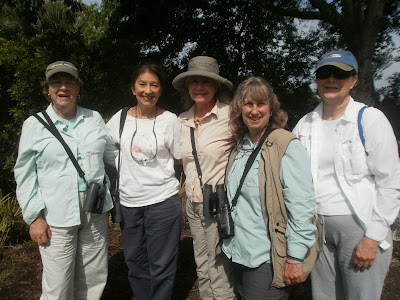 While I've been busy working at the Jekyll Island Guest Information Center and doing desk work for the Plover Patrol, other folks have been going out and volunteering for the Plover Patrol.  Here is Cindy McIntyre's blog post .  They are still  surviving out there with the help of people like Cindy  Thank you Cindy.
http://cindymcintyre.wordpress.com/2013/05/23/jekyll-island-my-second-home/
Posted by Lydia at 10:01 AM No comments: