Good News for the plovers and bad news for a deer

It was an exciting Wednesday July 27. First, I heard from the Georgia Sea Turtle Center’s Turtle Patrol that at least one of the Wilson’s Plover chicks made it through the rains and high tides. It must have been hiding in the dunes. That the way these birds survive. So now the chick watch begins.

I had a nice family last night for the Golf Cart Nature Tour. It was fairly quiet. There were Brown-headed Nuthatches all around us. An Eastern Kingbird was hawking for insects. There were lots of insects to find. They were finding us. However the insect couldn’t bug us too much at the tee at Pine Lake number 7. 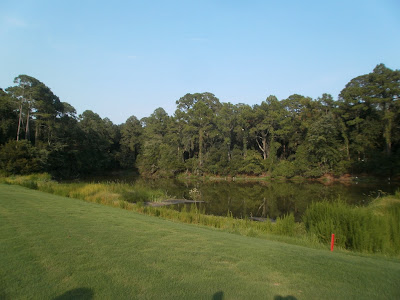 There is a pond. In that pond there were Roseate Spoonbills, Wood Storks, Anhingas but something else caught our attention.
There was something moving in the water. It looked like a brown ball. It was bouncing around. Then the alligator head popped up. It was pushing the brown ball around. The gator then proceeded to turn in the water. There was lots of splashing and the water around the brown ball turned dark. Oh my goodness, the brown ball was a deer. If that was not enough across the pond a large alligator began swimming for the brown ball and smaller alligator. This gator just ran into the ball and splashing followed by the big gator holding the brown ball. Wow! That is second time I have seen gators fighting over food this year.
Sorry there are no pictures of the food fight. 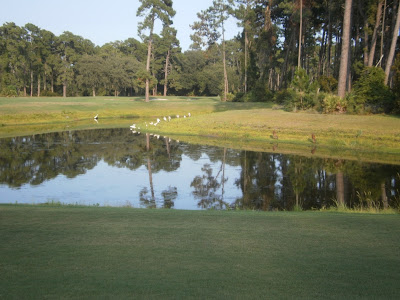 I will leave you with a more peaceful picture of another pond on Pine Lakes number 7.
Posted by Lydia at 10:21 AM No comments:

The smell hit me before I even saw the beach. When I got to the beach, I saw what the troubling smell was. 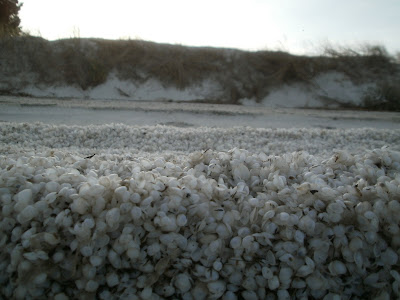 It was millions of dwarf surf clam. Last Friday and Saturday we had lots of rain. There was five and half inches at my house. These clams are indicator in changes in their environment. Was a rush of fresh water what killed them off? I will see if Donna, Georgia or Richard can help answer the question. Stay tuned. 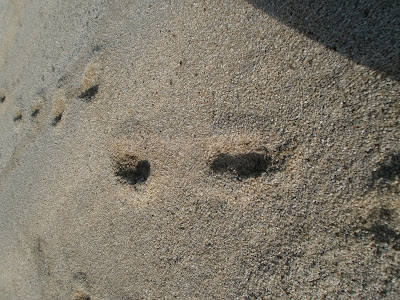 Can you see where I stepped into the shells.
This is a view down the beach 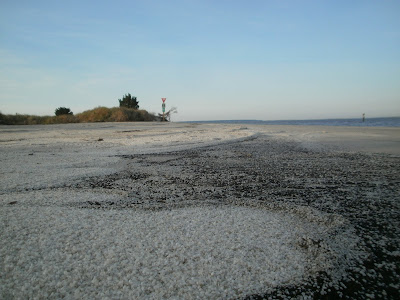 there were dwarf surf clams as far as I could see.
My mission on Saturday was twofold. One was to check on the Wilson’s Plovers nesting and the second one was to check for live and death birds on this portion of Jekyll’s beach. It was low tide and I found no dead birds. It was hard enough to find live ones near enough to identify. At low tide the birds are way out sitting on exposed sandbars. Mostly Laughing Gulls and one lone Ring-billed Gull were loafing at the edge of the surf. Oops, there were three Western Willets. 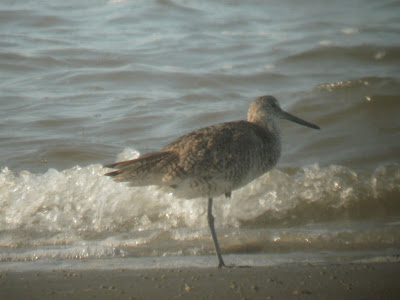 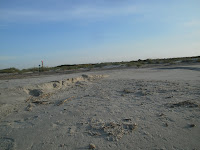 With all the rain and a high tide there was a good bit of wash over in the dunes. I could not find any sign of the Wilson’s Plovers so I don’t know their fate. Are they in the dunes? There was no sign of the nest. I will keep looking.
There were also a lot of whelks exposed. I watch a group gathering some up. I didn’t go down to be nosey. But I did wonder if someone had whelk stew?
I also encountered Barn Swallows, one Northern Rough-winged Swallow and one male hummingbird. The hummingbird was flying straight and fast. It did not look right or left. It was making a beeline south right out over the sound. Migration has begun.
Posted by Lydia at 4:39 PM 3 comments:

Working in my studio

I worked in my studio yesterday. Take a look at the proceess at my artworkfor birds blog. It is just a start of some interesting monotypes. On my walk to gather the plants, I saw two Great Crested Flycatcher playing chase through the trees. Beautiful to see nature at play. 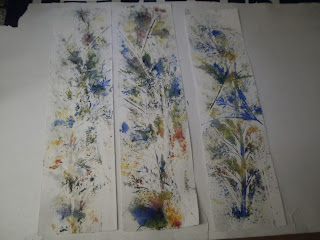 Last week, I was joined on my rambles by James and Rachel. 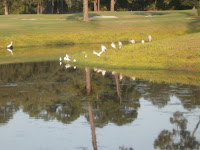 They are retired teachers. I enjoy teachers. They have a nature curiosity that is contagious. 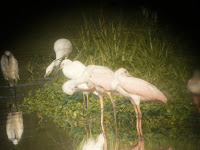 Wednesday, we explored Pine Lakes Golf course and found the Roseate Spoonbills.
On Thursday we saw the Wilson's Plover still nesting. Any day now, there may be chicks running around in the dunes. 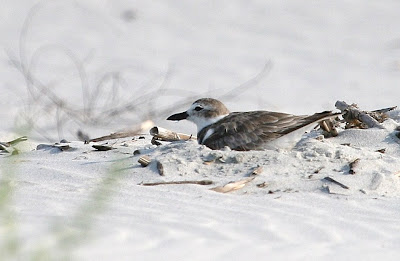 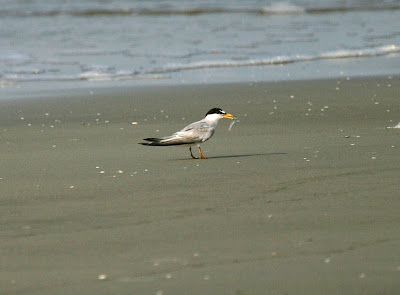 We also found fledgling Least Tern chicks being escorted by their parents. They are so young. Here is one that is still huddling down to hide. 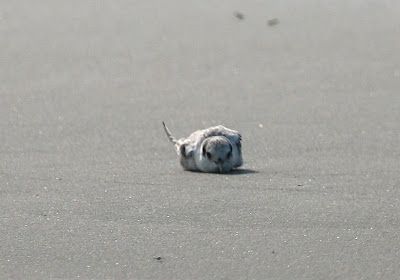 On the walk back, there was a Wilson's Plover feeding in the surf. 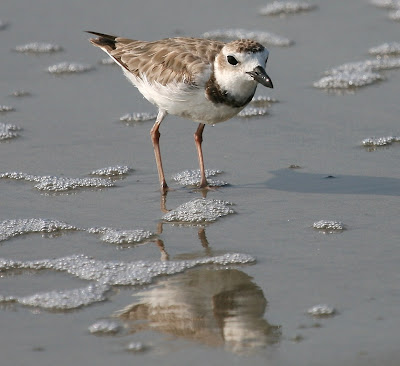 Here is a parting shots from James Williamson. He just got a new camera. He took all the large pictures in this blog. 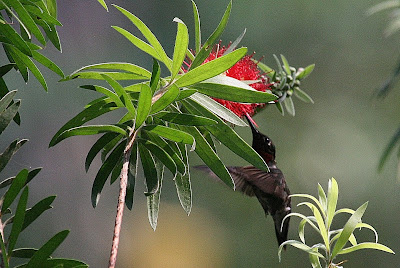 He does a great job, don't you think? Thanks James for letting me use these photos in the blog.
Posted by Lydia at 8:19 AM No comments:

On Friday, I went looking for the Wilson’s Plover.

I found them. The juvenile is around. This the kid still running here and there. It is very hard to keep up with this bird.
This is the area where the Wilson's Plover are nesting. 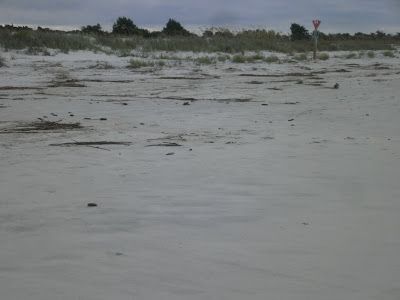 The pair is nesting. This time I found the male sitting on the net. 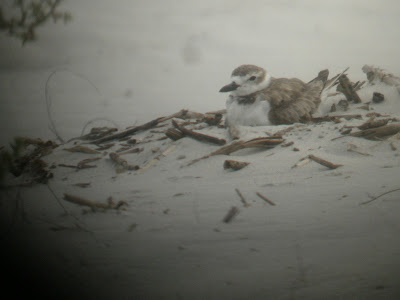 There were other interesting beach life. 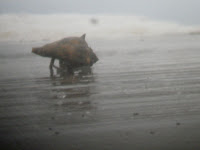 Here is a hermit crab at the edge of surf. 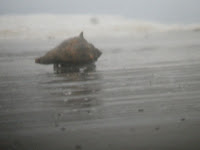 Here is a turtle crawl. I watch the Turtle Patrol go up and start laying the protection for the nest. 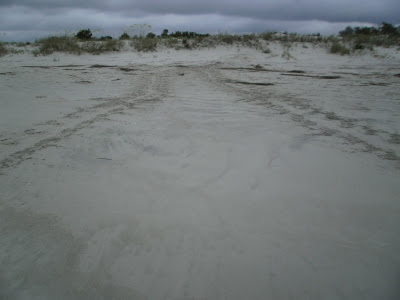 Harris Neck birding July 7, 2011
We were laughing. We were in the middle of Wood Storks, herons, egrets and White Ibis nesting. 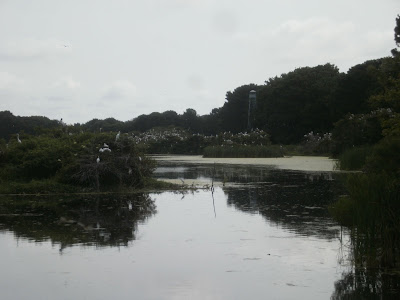 These birds were everywhere. 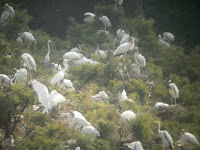 The Wood Storks were thick circling over our head. A Painting Bunting singing from the top of the cedar. There were Wood Ducks and a very early Blue-winged Teal. Birds were everywhere and we were laughing because there was nothing exotic. 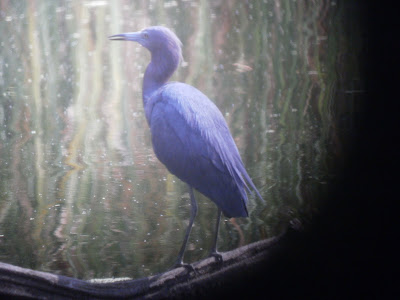 You see, Priscilla wanted to see a Blue Grosbeak. In this mayhem, there were no grosbeaks to be found. 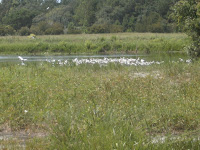 We continued to drive around the wildlife drive. It just kept getting hotter. We stopped in the shade and looked. At one point, there was a pond almost out of sight. White Ibis were feeding in large groups. It was an awesome sight. We drove just a little way when a flash of blue flew across the road. We stopped and there he was in his blueness. 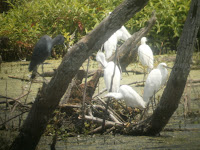 The Blue Grosbeak plus he had his family with him. As we watch the grosbeak, ibis were flying low over our heads. They were so close. There was just a soft whoosh and you could feel fanned by their passing. All in all it was a good day even if there wasn't anything exotic.
Posted by Lydia at 3:12 PM No comments:

It isn't a jelly fish

When we were looking at the jelly on the beach, I wondered what exactly what it was. I asked

Donna at the Jekyll 4-H Center. Here is what she has to say about this creature.
"Not a real jelly- it is a comb jelly- a different phyla- the Cntenophores- most do not contain stinging cells. Most are hermaphrodites and eat plankton or each other. The green line is the comb row- they glow at night!!! Very cool" 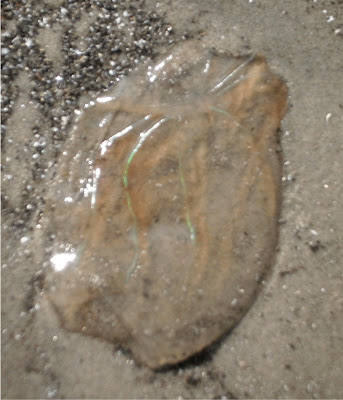 Indeed very cool, there is always something else to learn. Don't you love it!
Posted by Lydia at 9:51 AM 1 comment: