It was going to be a good day. I had 5 keenly interested people eager to get out birding. Margaret, Elizabeth, Patty, and Marilyn are all teachers. It sounded like they were a learning spree. They had been to Sapelo Island and explored barrier island ecology. Today they were learning about birds. Katy is a birder from Chicago who I met back around Christmas. The first bird that flew right at the group was the Gray Kingbird. As we gathered around introducing ourselves a pair of Bluebirds flew up to the power line. The male was the closest to us. What a great start. We had 5 Rosette Spoonbills with a Great Blue Heron and a Snowy Egret. At the south end Wilson’s Plovers were checking us out. There was one female and one male. Least Terns were feeding juveniles s on the beach. 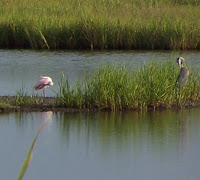 While we stood there watching the plovers a Gull-billed Tern fly by us. Mixed in the regular cast of characters, Royal Terns and Laughing Gull was a Sandwich Tern. I had been looking for Sandwich Terns for my Glynn County year list so there he was! A brief stop at Tidelands to look at the feeders a female Painted Bunting was feeding away. We finished up with Anhingas, night-herons, and baby Wood Storks. There is nothing like good company and good birds. 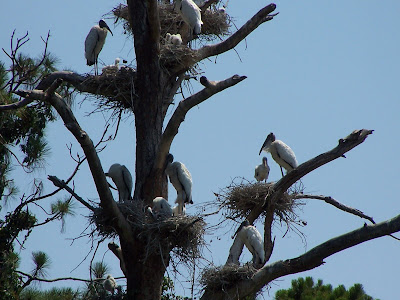 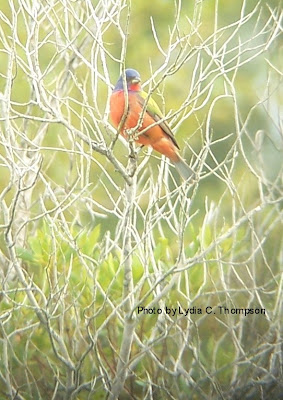 One of our common birds on Jekyll is the multicolored Painted Bunting. They have a soft jumbled song. Hearing the sweet song and then seeing the beautiful male sitting there really helps takes the "hot" out of a summer day.
Posted by Lydia at 8:51 AM No comments:

While looking for the Wilson's Plovers north of the Glory Boardwalk on Jekyll Island, I saw a Snowy Egret in the surf. So I sketched it. 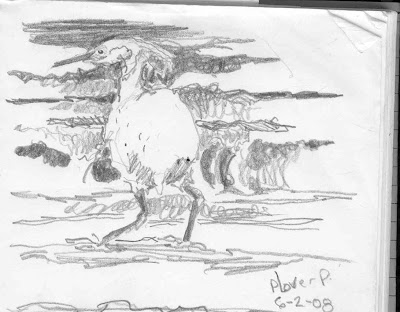 Babies on the beach 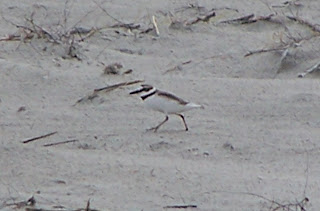 Today I was out very early looking for nesting Wilson's Plovers. There were three family groups with two chicks each. These were just west of the 4-H boardwalk on Jekyll Island. Later I met the Master Naturist class, everyone got to see and watch these plovers. The parents were very busy herding the chicks and chasing off anything that looked dangerous. There was one even chasing a Willet. It was a very busy morning.
I have been told of two more pairs so I will go out in the next couple of days. I want to thank Coastal Georgia Audubon for funding this project of data gathering. 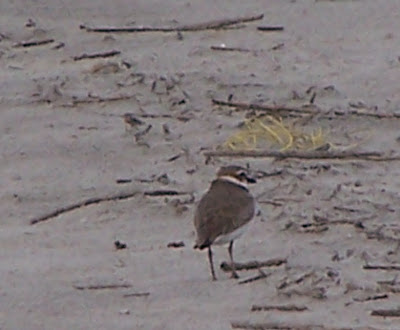