The nesting season for the Wilson's Plovers ended in August. There was one successful nest that fledged one chick.
Friday morning, I noticed the tide was very high. It got up so high that it took out the remote location sign "S4". I worried that some of the Wilson's Plover nesting signs were gone. It was long overdue to take out the signs. So after my ramble was over I went out. I found all of the sign and got most of them. 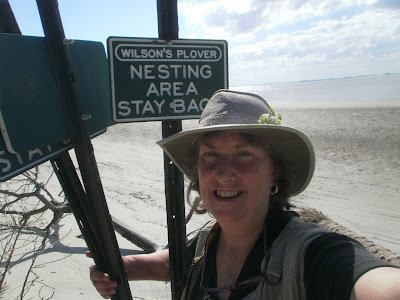 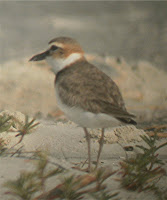 There are two more sign I am hoping to recruit some help to take out.

Now next year, let's help the Wilson's Plovers by getting Operation Plover Patrol up and running.

What is Operation Plover Patrol? It is a volunteer based interpretive program. It is a long-range twofold strategy to help these nesting & resting birds. Both strategies are educationally based:

First step is to create an entertaining PowerPoint program for civic organizations and schools in Glynn and McIntosh Counties. This program will highlight the birds and the problems they face. It will present simple solutions we can do to help these birds. This program is a way to recruit volunteers for the second part 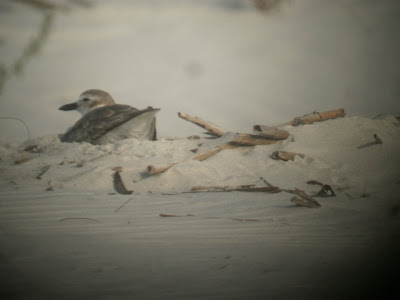 By having friendly knowledgeable interpreters in the area where the birds are nesting will give these birds a break. Want to help? There are lots of ways. Just ask.
Posted by Lydia at 4:07 PM 2 comments:

Sunday, I joined a group to go explore the flood plains of the Altamaha River. James Holland was our leader. Being the Altamaha RiverKeeper for many years, he learned this river and all its secrets. The thing about people like James is they love what they do. Even after they retire, they still work for their special place. Here is James standing beside cypress knees. James told us he was 6 feet 2 inches tall. 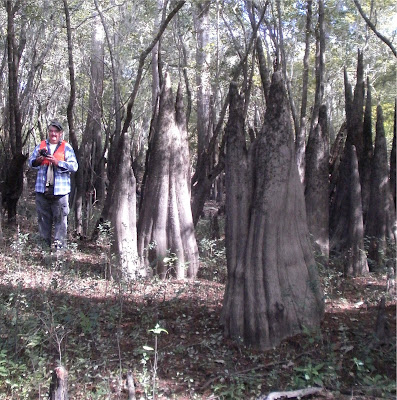 So five of us follow along with him as he talked about this swamp. It was a wonderland of large trees 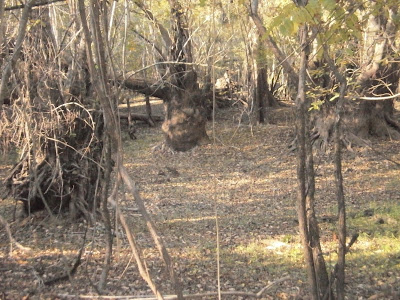 so tall that you felt like hobbits walking around them.

Look at this one. 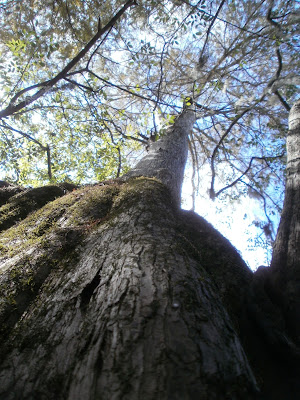 These tree are so big you can get inside. 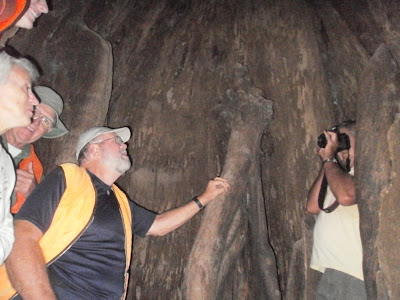 Here is the gang inside. Well everyone but me...I am not fond of close spaces. 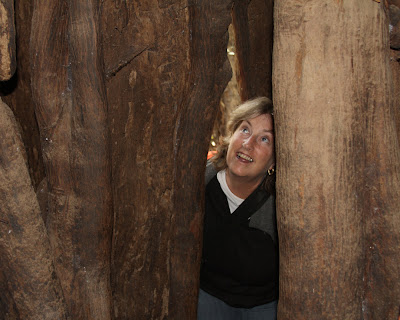 I just peeked inside to see this tree was like a chimney. 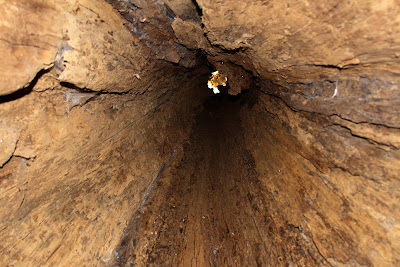 Yes, this tree is very much alive. Isn't it amazing?
We are in a drought. It has been very dry so we were able to walk around without getting our feet wet. Normally there would be water all around these trees. 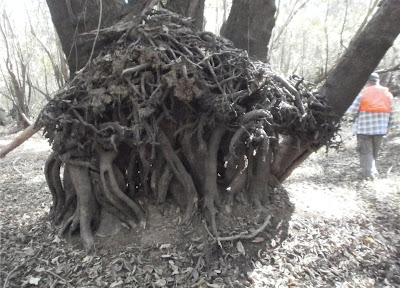 Look at this roots system. It really gives us a view of how these trees survive in a flood plain. Here is our whole gang next to a cypress knee both Mike and Gene are over 6 feet tall. The Cypress tree to the left of us is a champion tree that measures 44 feet and 5 inches. 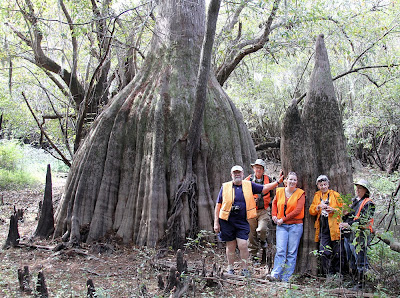 Thanks to James for sharing his world and for some of these great pictures.
Posted by Lydia at 8:38 AM 3 comments:

What a great day at Georgia's Sea Turtle Center's Turtleween. They gave me a table for my Operation Plover Patrol. Wild Birds Unlimited Nature Shop on Jekyll helped me by letting Jay B. Watcher come over and help me talk about birds on Jekyll Island. 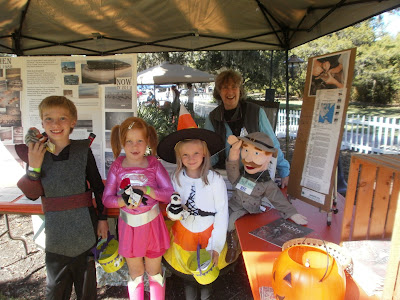 Jay did a lot of high fives. There was one very serious discussion with a budding scientist who promises to help. 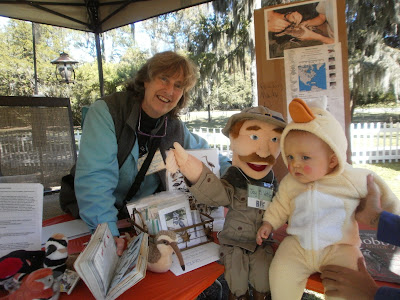 Right next door, kids were discovering alligators and snakes. 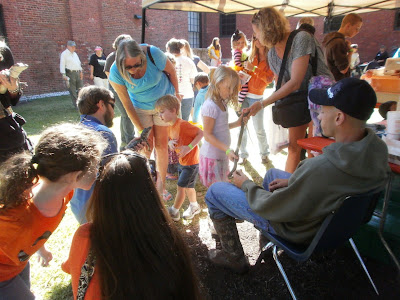 A Wonderful way to help everyone to appreciate these misunderstood animals.
I even got a chance to ride on the hay ride. 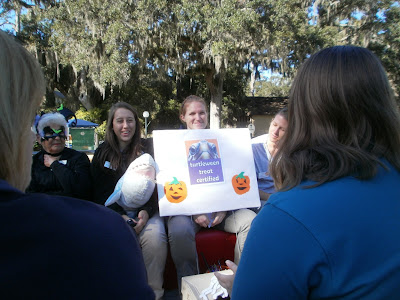 A little rain and the Big Sit

Sunday was a wonderful day at the Wildlife Viewing Tower at the Welcome Center. This is the view first thing in the morning 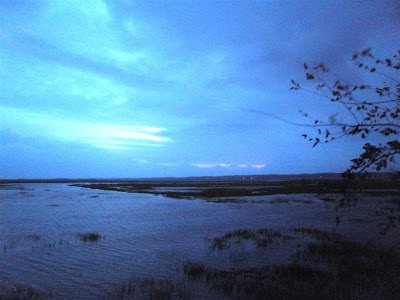 The weather was questionable at best; however that often creates great birding opportunities. Diana Churchill came over in the morning and helped me spot. We had 9 Peregrine Falcons. One came so close that I felt I could have reach out and touch it.

In the afternoon, several groups of folks came by to take a look from the tower. This is a Georgia Ornithological Society group who stop by to help spot for a while. 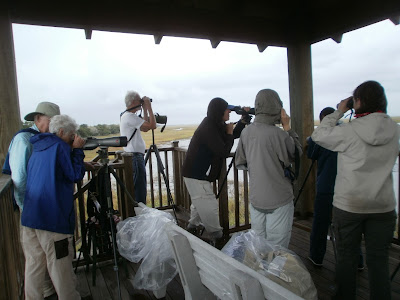 Sheila Willis was an excellent guide and as always kept wonderful notes.. There were several Coastal Georgia Audubon members who brought scopes and binocular to share. Charlie and Tracey Muise were wonderful. They carefully scanned the mud for one more species. 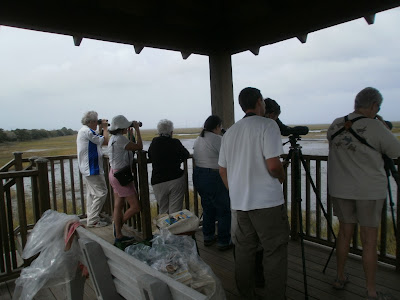 There were several Jekyll Islanders that came by to support my effort including Mac DeVaughn, Executive Director of the Jekyll Island Foundation. He has been very supportive of my Operation Plover Patrol project. His board has set a fund to get this project running. If you interested in this project, please comment and I will send you the details.
Here is my poster explaining the Operation Plover Patrol project. I had at the Georgia Ornothological Society meeting the night before the Big Sit. 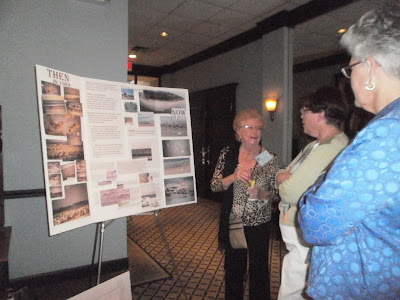 Now to the birds, I ended up with 45 species. The Whimbrel made several appearances. Clapper Rail antics were shows in themselves. The complete list of birds is below. It is always fair weather when good fellows get together.

Jekyll Island, Glynn, US-GA Oct 9, 2011 6:50 AM - 5:50 PM Protocol: StationaryComments: This was a BIG SIT for Jekyll Island at the Wildlife Viewing tower on the causeway. This area is a hammock (small marsh island) It overlooks a wide mud flat. 45 species
Wood Stork 10, 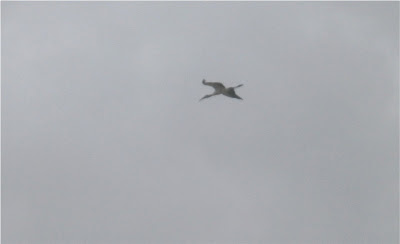 I have been planning this for a while. On Sunday October 9, I will be at the Wildlife Viewing Tower at the Jekyll Island Visitor Information Center on Jekyll Island Causeway. Now from 12:30 p.m. to 2:30 Ms. Klahn and her Salt Marsh Solders will be joining me. These are Middle Schoolers. Let's hope the rain holds off. We will celebrate the life of 2 Whimbrel, Machi and Goshen who were shot on September 12. There has been two whimbrels using this mud flat area since early August.

Good Birding to us all!
Posted by Lydia at 4:28 PM No comments: