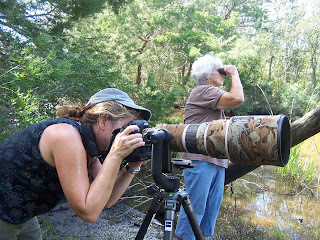 Thursday September 27,2007 The tide is super high this morning and So we did not get to the beach but even with that slow start to the morning birding we did see some very good birds. Teresa wanted to photograph Roseate Spoonbills. They were resting on a little tucked away spot on the Jekyll Island Causeway. It was going to take so doing but the crew was willing so after some rules we tried to sneak in. Teresa got some shots. I hope they turn out for her. 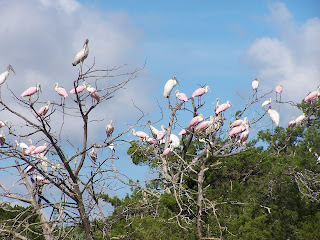 The tide was just way to high to make a second attempt at the beach birds so we went to the Campground Sanctuary. It was a good move. There were at least three species of Thrush. A few warblers popped out including one very stunning American Redstart male. That bird just sparkled as it took advantage of the bird bath. What a little jewel the bird Sanctuary has turned out to be for the b 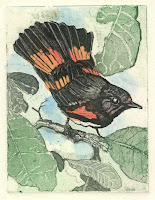 irds and birdwatchers.
Posted by Lydia at 3:17 PM No comments: 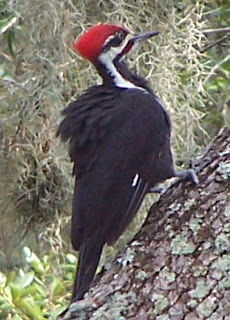 Well I was at Jekyll's Wild birds Unlimited Nature Shop Monday through Wednesday.
Tuesday September 25, there just seemed to be a lot of birds around. Scarlet Tanager was the bird of the week for me but there were other neat birds around Jekyll’s Wild Birds Unlimited Nature Shop. There were quite a few warblers species around as well as our residents. Here are a few photos. 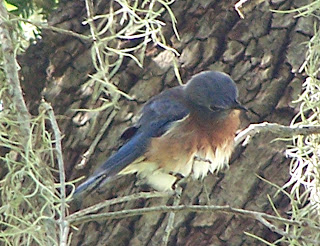 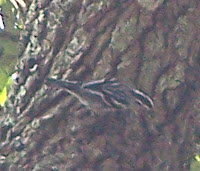 The Golden Isles and Jekyll had a great deal of rain last week . It stopped me from going out to morning bird watch. Last Wednesday my day was off to a good start as I drove onto Jekyll Island. There was a Bald Eagle flying over the marsh then landing on a power pole. It was an awesome sight. 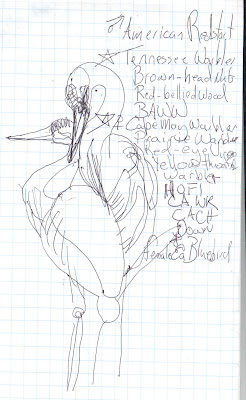 Gary and Janie Smith own the Wild Birds Unlimited Nature Shop on Jekyll Island. They have contracted with me to be their resident naturist and artist in resident. Part of that is that I am in the shop on Wednesdays. Last Wednesday was overcast and there were not a lot of folks visiting the historic district shop. So I had time to drag the porch chair out to a stop where I can see all the feeders as well as the live oaks and sky.
That afternoon as I sat and played around with the Identflyer Wand, I had a nice group of birds some of the warblers included, American Redstarts, Black & White, Tennessee, Cape May, Prairie, and resident Yellow-throated. Here are my notes.
Posted by Lydia at 1:42 PM No comments: 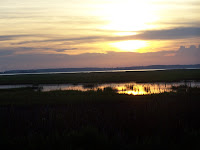 We did something a little different on Thursday. I met two long time Ramblers earlier than normal. Instead of meeting on Jekyll, we met at Gisco Marina Road which is just off US 17 on the causeway . It was a great idea. The shorebirds were around the marsh and pond there. There was a good group of Blue-winged Teal. Among all these birds there was one dowitcher that caught my attention. At first I thought it was a Stilt Sandpiper. I was so excited but the more I looked and moved around to get a better looks at it. It just was not the right shape. It was feeding with two Short-billed Dowitchers. This bird was the same size and shape but it was very pale. It did not have the brown bib inst 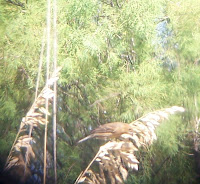 ead it was very white from the chin to the under tail coverts. The back was about two shades lighter. The bill was about same length. It looked like a pale Short-billed Dowitcher. Hum? I love birds like this for they make us think and it keeps us on our toes.
We finally tore us ourselves away from shorebirds, heron, egrets and spoonbills. We moved on to the southend of Jekyll. The mosquitoes greeted us and stayed with us as we walked us out to the dunes. There were quite a few Eastern Kingbirds flying around. I kept hearing Bobolinks with one step about 15 flew off, a few landed in the bushes silhouet 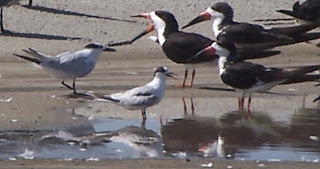 ted against the sun. It seemed to the problem of the day. The birds were playing hide & go seek. We had a Tennessee Warbler play peak a boo in a bush. Out on the beach there were good numbers of Royal Terns and Laughing Gulls peppered in were Caspian Terns, Sandwich Terns and a surprising large number of Common Terns. 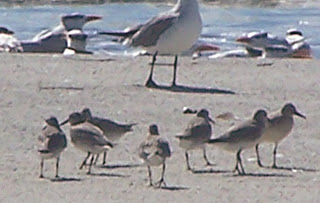 At one point I counted 60 Common Terns. Standing tall in the mix were three Lesser Black-backed Gulls. We also had 7 Red Knots with a Semipalmated Sandpiper, 5 Western and a few Leas Sandpipers. Black Skimmers were chatting back and forth. But it was very hot so we moved on to the Campground where we spend the rest of the morning. 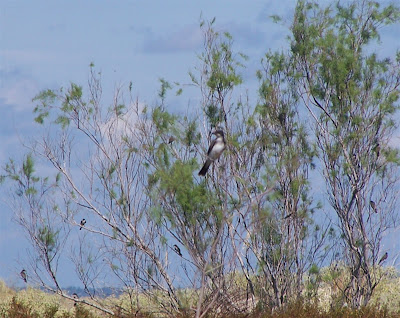 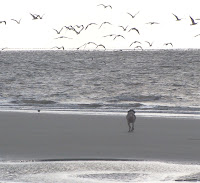 Dogs make great companions. Along with the companionship come responsibilities. Exercise is part of those responsibilities. Now-a-days as we crowd out wildlife, part of our responsibilities is to understand where and when it is good to allow our dogs to run free. Your dog on the beach running free is a beautiful sight to you. But when a dog runs through resting flocks of migrating birds, it ceases being about the dog’s game. It is a matter of life and death for some of those birds who have already traveled miles and have miles still to go. 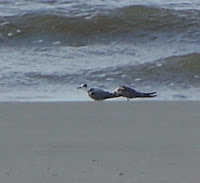 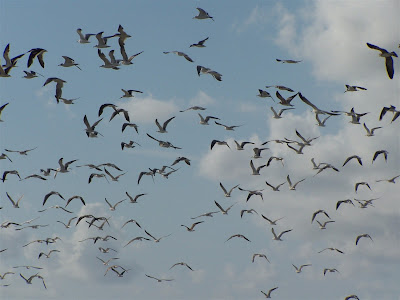 I looked forward to a quiet morning of studying swallows and terns. There I stood on the last boardwalk over one of my favorite spots watching a few swallows when I saw the shorebirds well up out on the beach. My heart sank. I headed immediately out to the beach. There was a couple with their lovely spaniel. Well the dog was bounding thru the birds. If I had been a few minutes early I could have been in position to engage this couple with their dog in conversation. In this conversation, I explain why it is important to allow the birds here to rest. I find that most folks have no idea what these birds are doing there. Once they hear & understand, they gladly help the birds. Education is the key to understanding and cooperation. We need to get the word out that the Southend of Jekyll is a very special place. It can be a place to watch, study, and learn about birds and wildlife. There is a comment book at the Jekyll Island Campground Bird Sanctuary where folk can write comments about the sanctuary. Many of the comments are thanking the Jekyll Island Authority folks for having th 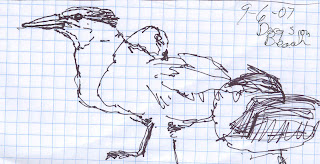 is quiet place of reflection. The south end beach is a similar place of rest and quiet.
Today the dog bounded by me. The birds were gone. I turned to see that part of the flock had settled down east of me. I picked up my scope and walked there. It was hot and the tide was going out which meant that a lot of the birds were heading out to other resting places. While studying the flock I found several species I wanted to draw and record. Caspian, Royal, and Sandwich Terns were present. Working away I didn’t find any Common or Forster’s Terns but I was content to get some contour drawings of the mixed flocks. These contour drawing are what I use to get a “feel” for the birds. I call this excise tactile learning. This excise makes you pay attention to the details that are important in creating a work of art. My excise was interrupted again when the dog came back bounding through the flock. The birds were gone again. The couple walked by me waved and smiled totally oblivious. I had missed my opportunity to engaging them in conversation. I turned around and headed back west. I did find three Black Terns but t 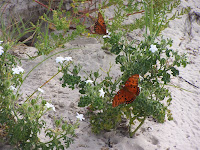 I turned and went to the Campground Sanctuary. There it was quiet and the birds were enjoying the food and water. There were Northern Parula, Summer Tanager and White-eyed Vireos as well as the ever present of cardinals, chick-a-dee and tit

mice. The Amphitheater area had resting night-herons and Anhingas. It was a productive morning but I will apology for the rant about the dog on the beach. It just shows me we have to do more to educate Jekyll’s visitors about Jekyll’s wildlife. What a wonderful opportunity we have to educate in a uniquely Jekyll way which is fun and enjoyable!
Thanks Lydia
Posted by Lydia at 12:46 PM No comments: 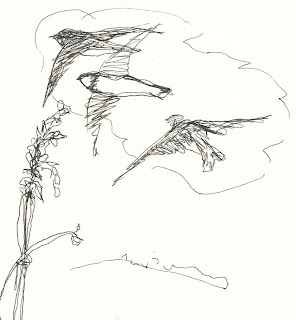 n, Barn, Barn, CLIFF, Barn, Barn, Barn, Barn, Barn, BANK, PURPLE MARTIN, Barn, Barn- there goes five Eastern Kingbirds, Bobolinks bink over head. Every year I wade through the heat of August to see this spectacle, the migration of swallows. It isn’t like the Tree Swallow migration in October where the flocks are gathered in tight swirls. These birds are scattered over the dunes with other birds heading south with them. It is hard to pick one bird for they are flying up and around, back and forth. The nice ingredient is they are all flying at or just a little above eye level. Well except the martins, they fly much higher and direct. They are just leaving. The Cliff Swallows seem to fly just a little higher and more direct as well. They may bank once or twice to show off the buffy rumps before they blast off south. They are all flying over the golden sea oats. This triggers my imagination. I a

m alone so I bring out my sketch book and draw.

Out on the beach the tide is high and coming in so the gulls and terns are gathered together. There are Black, Least, Caspian, Sandwich, Common, Forster’s Terns mixed in with the Royal Terns and the Black Skimmers. It is hard to tear myself away but I finally do and head off to lunch in the Bird Sanctuary in the Campground. A Worm-eatin

g Warbler is picking food for itself behind the bird bath. What a beautiful little skulker! It takes some time to see around the leaves to get the ochre colored head with the black strips that help clinch the ID. I just have to look at the Yellow-crowned Night-heron so I finished the morning at the Amphitheater. The image is an adult Yellow-crowned flying across the deep green Amphitheater pond is an image I want to etch someday. I was treated to great views of both night-herons but the treat were the Pine Warblers that were singing as they foraged in the pines. Yes it is hot but the images of migration make it worth the wade.
Lydia 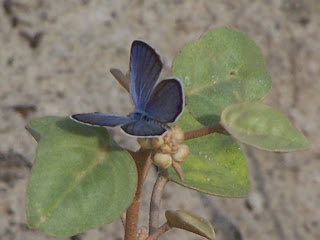 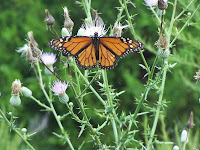 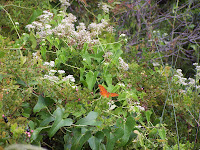