Spoonbills on the Jekyll Island Causeway

On Sunday August 30, I was headed to work at Jekyll Island Guest Information Center but I was early. It was high tide so I drove past the toll plaza and pulled over. This is a favorite place to see spoonbills. Today was no different. What a treat to watch before going to work helping people discover Jekyll Island. 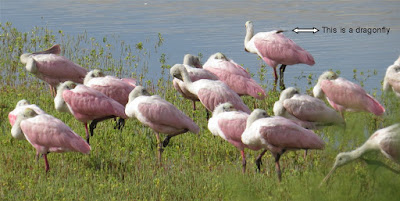 Here is a look through the palms at the gathering. 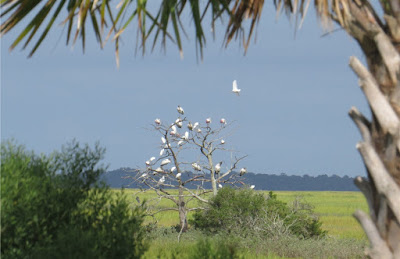 A gathering of Wood Storks

On Monday, I noticed this group of wood stork out in the marsh.  It
was fun to take some time just to enjoy them. 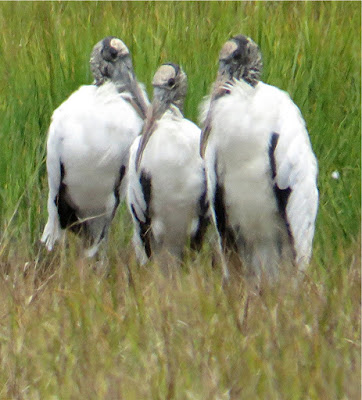 Walking the south end of Jekyll August the 4th

Every time I walk the south end of Jekyll, there is something new going on.  I enter at the Glory Boardwalk which is located at the soccer field. This boardwalk is named after the 1988 movie Glory which was filmed here. The last part of that movie was a charge down the beach. At the time, my father  and Lorraine Dusenbury worked to ensure that part of Jekyll was protected and reconstructed the correct way.  My father spent some time finding a person who would over see the reconstruction. So this boardwalk is here because of the movie. 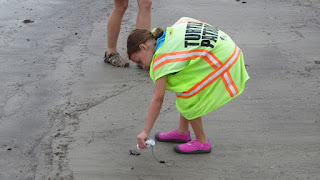 Any way I met Meghan Davies, a Americorp intern at the Georgia Sea Turtle Center. She is a birder so it was fun to go out on the walk with her.  The first thing we spot is Twostriped Walking Stick. They come out at this time of year to mate. They seem to like Cabbage Palms. 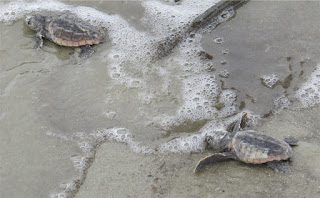 It is low tide so the birds are spread out. But there was a crowd of people.  As we got closer, it is the Georgia Sea Turtle Center group releasing some baby sea turtles.  It was fun to watch these young turtle make their way to the ocean.

There was some birds around as well. Here a Lesser Black-back Gull. 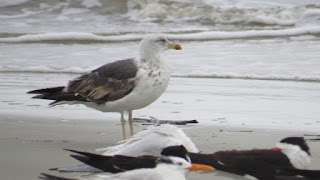