The family appeared to be totally unaware of the birds other than that they could fly. 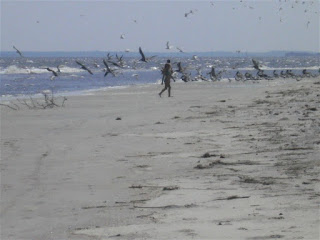 But once the family walked on around the corner the birds settled down.  There were all kinds of terns out on the beach including this one Black Tern. 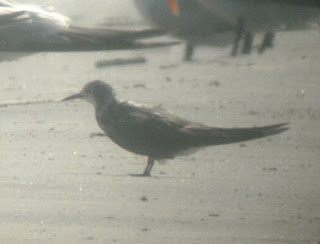 Another wonderful surprise were three Piping Plovers that scurried out of the way and then settled into the upper dunes with some Sanderlings. 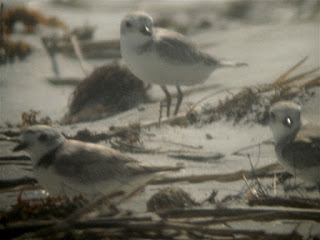 Here is one more picture of the gang resting.  There is a young Sandwich Tern behind the Black Skimmer.  Yes, it was very hot out there watching these birds but the variety of birds helped me stay a little longer. 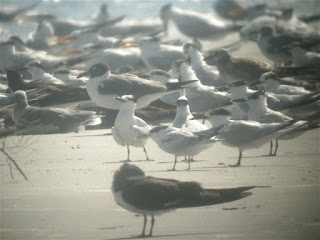 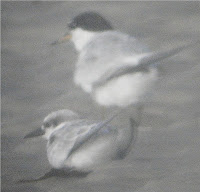 Last Friday, I went out to the south end of Jekyll.  There were all ages of terns.  There were Least Terns resting before another attempt to catch a small fish or maybe even be feed a fish.
Here is a Royal Tern fledgling looking hopefully at any tern. 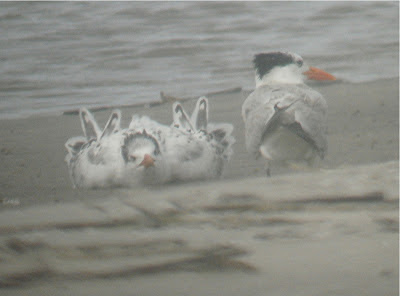 When that doesn't work, it gets up and begs.  It didn't work the adult just walked off. 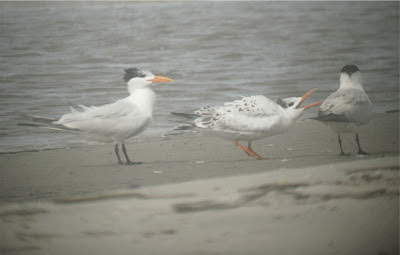 However for me,  I enjoyed watching all the Sandwich Terns resting in the area. 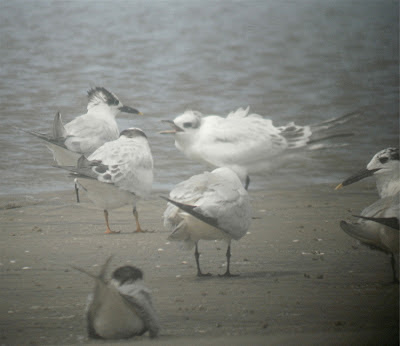 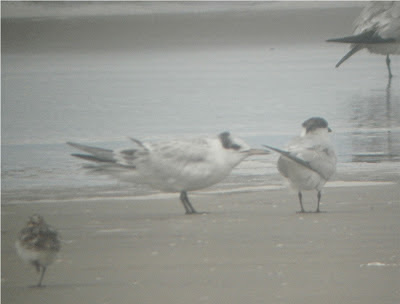 This is a very young Sandwich Tern.  The first time I saw one of these terns, I thought I had a rare species.
Of course that bubble was popped when the adult came in and feed it a fish. It might be hot getting to Jekyll Point but it worth it to stand in a nursery school of terns. 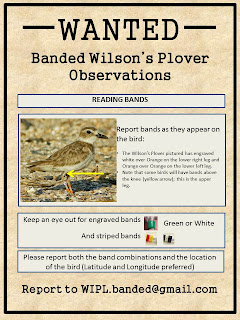 Wilson's Plovers are beginning to move off the nesting grounds and up and down the coast.  Help the scientists who are studying them.  Here is what they are looking for and where to report the birds. Thanks to the hard to the hard work of these scientists, we can help these beach nesting birds.
Posted by Lydia at 8:09 AM No comments:

Swallow-tailed Kite on Jekyll in June

There were several people who told me they had seen a Swallow-tailed Kite on Jekyll in June.  This is rather early or late for this species to be seen regularly on a barrier island.  However, they do nest just over the marsh so I did not think much about it.   Well, I did feel I was missing a beautiful bird so I did think about it a little.
Late in June I got a call from Cheryl,  Captain Mark Miller from Little Cumberland Island had fished a bird out of the St. Andrews Sound.  This is the body of water between Little Cumberland and Jekyll Islands.  She wanted to know where to take it.  It was a raptor.  "Take it to the Turtle Center" I replied.  We need to know more about the health of our birds.  So the bird went to the Georgia Sea Turtle Center.  The bird was a juvenile Swallow-tailed Kite.  Was this the same bird everyone had been reporting to me?
This is the kite when it arrived at the Georgia Sea Turtle Center.
Here is Mark's story of finding the kite:

"Last Saturday, I was running a boat and spotted a bird floating in the water in front of St Andrews Park on the southern tip of Jekyll Island. I turned around and observed the bird trying to swim. We drifted up to it and at first glance thought it might be an eagle. It was attempting to paddle with its wings, definitely not a waterbird. We made a pass by it and I simply reached over and scooped it up. I took the bird to the Georgia Sea Turtle Center. Rachael checked the bird in to the center. It turned out to be a juvenile Kite. Over the last week it has been cared for by the Center and brought back to good health."
This bird recovered.
And yesterday July 10, Tim Keyes,
Wildlife Biologist,  Nongame Conservation Section, Wildlife Resources Division sent out an email.

Since I don't have any pictures of the release, this a sketch I did last August of Swallow-tailed Kites feeding over a field.

Here is what Tim said:  "The release went well. We found a group of about 50 Swallow-tailed Kites feeding in Brantley county. Upon release the bird flew to a tree and perched for about 1/2 hour. It was then seen circling and foraging with other kites, and was seen feeding on the wing.


We have a transmitter on it, so we will try to keep track of it to confirm it is able to feed etc..."

This is a wonderful ending for a young bird.  Thanks all of you who were there to help.